After getting American Fuzzy Lop set up and fuzzing tcpdump at a basic level, we can move onto some more advanced features of afl that allow you to get quite a few speed increases, which is of the utmost importance when fuzzing.

Previously, I introduced afl-gcc as a wrapper for gcc that will instrument the resulting binary as it compiles in order to provide feedback during the fuzzing process. However, this time we will use afl-clang-fast which allows for a nice speedboost.

In order to enable the use of afl-clang-fast, I will need to install clang in the chroot that I created for the first tutorial.

Inside the afl-1.83b folder is another folder called llvm_mode, which contains the source for the afl-clang-fast clang wrapper. Changing to this directory, we can build these binaries and use them to build tcpdump again in a slightly different way.

During compilation, you should see similar printouts to what afl-gcc provided:

Once compiled, in order to have clean results, the findings directory used in previous examples needs to be removed and recreated so I can begin fuzzing the new binary with the same afl-fuzz command. 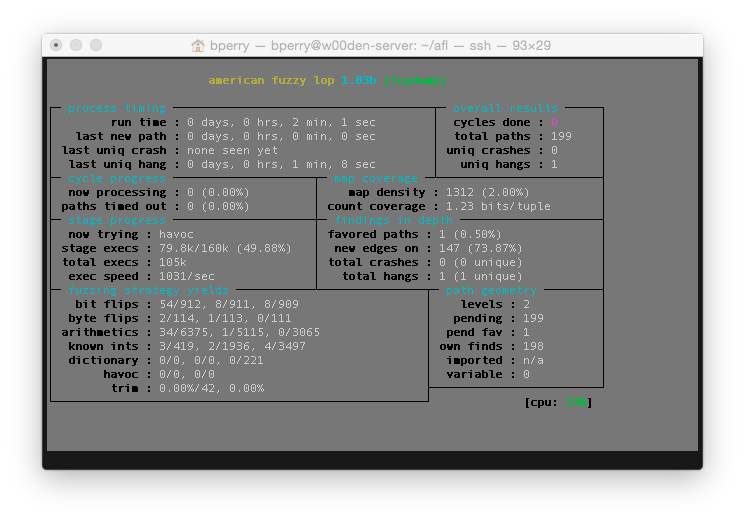 Now, afl-fuzz only takes up a single core, so on most modern systems, a single instance of afl-fuzz leaves a whole lot of system left doing nothing. I can use a master/slave feature of afl that lets one afl-fuzz instance (the master) perform deterministic fuzzing while the slaves perform more traditional random fuzzing.

In order to achieve this, I will remove the findings directory completely and create a new directory called syncdir which all the afl-fuzz instances will use.

I am also going to use screen this time so that I can start my afl-fuzz processes in the background without worrying about keeping them alive in an open terminal window. The first afl-fuzz instance I will create is the ‘master’ instance whose only job is to perform deterministic fuzzing.

Notice that I am adding a new argument to afl-fuzz. -M means that this process will be a master process, and that the name of the process will be ‘fuzzer1’. My amateurish fuzzing server has 6 cores, so I can easily add 3 slave processes and still have some room left for other processes if need be. If you are still in the screen session for the master fuzzer, hit ctrl-a, then ctrl-d to background the master screen session. I can create the next three afl-fuzz processes in a similar way

Instead of using the -M argument, I am now using -S which means that this process will be a slave process, performing nondeterministic random fuzzing. In order to add 2 more afl-fuzz processes, I run the exact same commands, but naming the new fuzzers fuzzer3 and fuzzer4.

When I list the contents of the syncdir directory, I see the names of my fuzzers that are currently running.

You might be wondering, how can I keep track of where each fuzzer is and how it is doing if each process is running in a screen session in the background? Running a single terminal for each fuzzer takes up a lot of real estate and is cumbersome. Luckily, afl comes with a utility to remedy just this scenario called afl-whatsup. If you point afl-whatsup to the syncdir that all the fuzzer instances are using to store their data, it will give a nice summary of what is currently happening.

On my fuzzing machine, I actually use the watch command to refresh the output of afl-whatsup every couple of seconds on a passive monitor that I can just glance at. If you notice, cumulatively we are achieving 4000 executions a second, as opposed to the paultry 900-1000 a single fuzzer was giving. Letting this sit for a week will yield some excellent test cases that causes crashes and hangs.